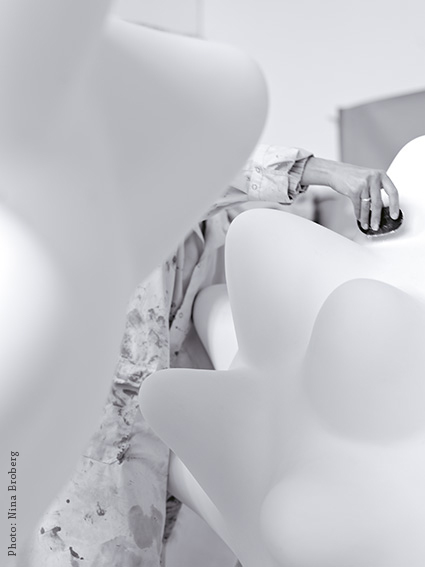 With presence and a profound knowledge of numerous techniques, Nikolina Ställborn works with the creation of atmospheres and situations. She mainly works with installations that include sculptures and light. In both her public permanent installations and temporary ones in exhibitions and other spaces, she works with attention to the environment as a whole, it´s context and the architecture of the space. Her interest in biology is visualised in various ways throughout her practice, which often highlights the complexities of individual organisms.

Nikolina Ställborn is educated in sculpture at the Icelandic Collage of Art and Crafts (now part of the Iceland Academy of the Arts) in Reykjavík and has a Master of Fine Art from The Royal Institute (Kungliga Konsthögskolan) in Stockholm. She has participated in several exhibitions in the Nordic region and has finalised five public commissions in demanding outdoor conditions in both Iceland and Sweden, including a 250-metre street with 20 large-scale sculptures (Henriksdalsallén i Hammarby Sjöstad, Sweden). Commissioners include Stockholm Konst, the city of Solna, Stockholmshem and Tranås municipality. Ställborn also has a background in analogue photography and worked for several years as a copyist and photo finisher in parallel to her own artistic practice (Svartvita kopior 1991, Mörkrummet AB 1992 and Crimson Färglabb AB 1993-2009).